Ode to the Silver Screen... 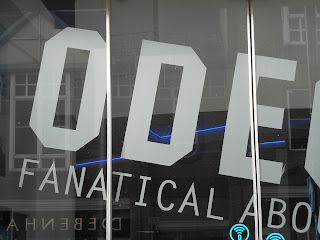 I get so many emails about arts events I can't possibly get to all of them (though I might be tempted to try), but a recent Odeon cinema email caught my eye, inviting me to a film for just £3 - including coffee! The catch? - it's during the day in the week and you should be over 55. No problem for me! - I assumed it would be stuff I wasn't particularly keen on, but no, first up was ' Bridge of Spies' - so along I went one Tuesday. I was a bit miffed they didn't query my age (a young-looking 57!), but to be honest I don't think they care as long as there's people there at 11.00 on a Tuesday.
Anyway, If you fit  the bill, and can make it, I recommend it! And Bridge of Spies is a good film, with great performances and a sharp and wryly witty script from the Coen brothers. It spills over to American sentimentality at the end, but then it is about individuals doing what is humanly right in difficult times.  I also enjoyed 'Joy'  but I think I'll give Dad's Army a miss. 'Spotlight' on this week...
Song - the Beatles - When I'm Sixty-Four.
Posted by Unknown at 15:30