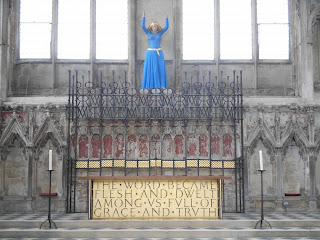 In Ely this weekend for The Elyfolkfestival I visited the cathedral to find what you and I might call an art installation in the 15th century Lady Chapel. Installed in 2000 by sculptor David Wynne (who died in 2014) it was described in the interpretive sign as 'controversial' - that most overused word of the 21st century. It looks a fairly conventional figure of a young woman to me, with her hands raised to Heaven, but looking determinedly down to the ground - surely a reference to doing God's will on Earth. Even the colours are traditional blue and gold. Just because she doesn't look like something Fra Angelico painted.....The modern text and ironwork fit well in the sparse Gothic space. Controversial? -no, deeply conventional. Almost more interesting is the cathedral's interpretation of the space as 'broken' because of the work of several waves of iconoclasts, including Ely's own Oliver Cromwell. So we can see it as a parable of a broken World, that with love and understanding we can all help make better. So we mustn't let those 21st century iconoclasts who want to destroy contemporary art because they don't understand it have their way. Peace, love and misunderstanding, that's what I preach.
Oh, and Megson, pictured below, were very good, and coming to the Arts Centre 30th November - I'll see you there! 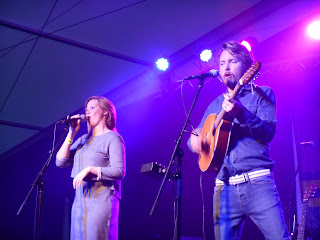