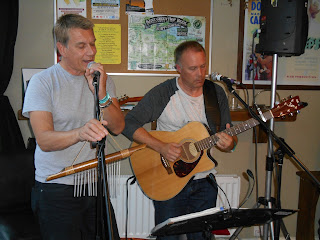 I shouldn't have been surprised to see a sad facebook post yesterday - the excellent acoustic singer-songwriters Blackdoghat (Ian Nicholson (left) and John Sage) asking if anyone knows a venue where their music won't be drowned by people talking over them. Well I'm sure we all know plenty in the Colchester area - the boys are looking for something in London. I hope to put them on here as soon as I can. But it got me thinking about the relationship between the musicians and the audience. Sure there's space for some banter (plenty at the amazing Young 'Uns gig at Folkeast on Saturday), but ultimately if you're at a gig, even if it's free in the corner of a pub, surely you should at least try to listen. Or at least respect those that are. That way I've found several great bands.
But it goes the other way too - I think musicians should respect the intelligence of the audience by allowing them to listen to the music. Too many musicians (particularly Folk, but it happens in everything from classical to rock) take longer to tell you about the music than sing it! Anyway, at  gigs I enjoyed at the weekend, the Young'uns just walked out on stage and sang Billy Bragg's 'Between the Wars'. No explanation, no intro, the song stood on it's own. And last night Orlando Jopling, Artistic Director of the Roman River Festival, stepped out with his cello and played a Bach  cello suite. No intro, just the notes filling the air of the Beth Chatto Gardens. Magnificent! 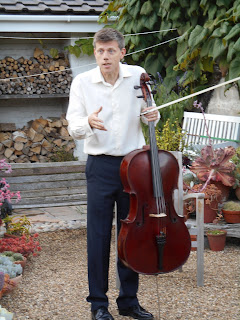 With many thanks to Ian, John and Orlando for the photos