Sorry, no blogs last weekend as I've been up in London. Yes, I know there's so much on in Colchester it seems perverse to fight the crowds in London, but I had to catch up with Messrs. Djokovic and Federer. While I was up in Town I selected two interesting exhibitions to see (can't watch tennis all day.....). I think our National Maritime Museum at Greenwich is a gem, and their new exhibition on the life (and Diary) of Samuel Pepys was fascinating. But for sheer draw-dropping artefacts you couldn't beat the Science Museum with their show about the Russian space program - and wonderful Soviet-era art as well. It was really weird looking at bits of space junk from a nation that no longer exists. Indeed one Cosmonaut went up to the space station as a worker of the CCCP, and came back down as a citizen of the Russian Federation! So if you are in London for a bit of shopping or sport, why not make a trip to South Ken? 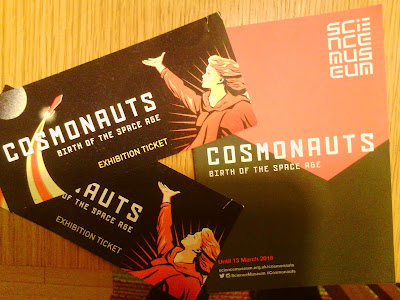 Song? too many to chose from...but after narrowly rejecting Billy Bragg 'The Space Race is Over' I realised it just had to be Elton John - Rocket Man, particularly since I found this live 1979 version recorded in the Soviet Union! You won't believe the research that goes into this!
Posted by Unknown at 19:56