New fans of the Roman River Festival are popping up all over....this guy, Longinus, came all the way from Bulgaria to be in the Castle Sunday to hear the lovely singing of Julia Doyle, whom I notice is singing at The Barbican Hall on Oct 17th with the Crouch End Festival Chorus. Sounds a great gig if you're in London that weekend.

And Rock legend Rick Wakeman was so impressed with the programme he signed it for me... 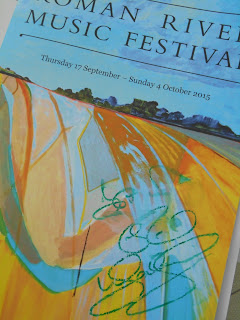 And whenever I mention to someone 'Joe Stilgoe' they say 'oh, is he on in Colchester?' - YES (sorry, Rick Wakeman reference there...), he was, I mentioned it in every blog! ...still you can always get his album, New Songs for Old Souls - great stuff..

The Song...well, it was going to be some YES ...Ritual from 'Tales from Topographic Oceans' - some vinyl I wore out back in 1975! (all 21 minutes - stay with it!). With thanks to Rick Wakeman, and Chris Squire rest in peace.

But if you want something shorter, how about a track Joe Stilgoe played from the Beach Boys seminal album Pet Sounds - I Just Wasn't Made for TheseTimes.