Roman River flows to the Stour 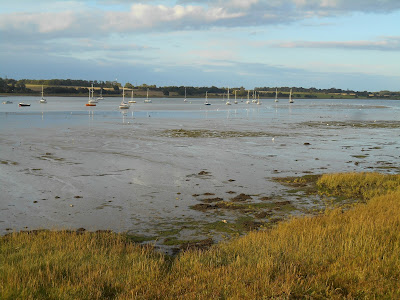 Out to Mistley and Manningtree today for a taster of the Roman River festival - I feel a bit of a traitor on the banks of the Stour, but I appreciate just how positive a force Roman River Music has become for Music (and the arts in general) in North-east Essex. Though I would say, if you're going to Mistley for RRM, then why not the Harwich Festival next summer? This year it was packed with brilliant events and definitely not sold out. Check it out next summer.
Anyway, a stellar line-up for this evening's concert - 2 leading musicians from the LSO - Roman Simovic and Tim Hugh, with pianist Alissa Firsova. This is the sort of quality that Orlando Jopling attracts, but of course the proof is in the playing, and I was lucky enough to catch part of the rehearsal. All I can say is ...amazing! And to witness at first-hand the sheer effort they put in - I gaily assumed they would play a few bars, then head off to the bar,  but no, 3 hours is allotted for rehearsal! It just shows the hard work required to be that good. To be in a village church with those star musicians was a humbling experience. So book now for Abberton this Saturday and Copford sunday, which promise to be just as good - in totally different ways! See you there! 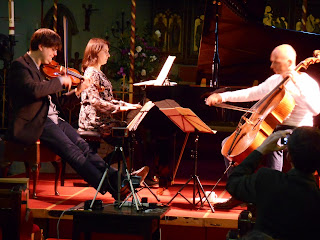 I also popped in to the North House Gallery for a preview of John Doubleday's paintings, which will be on show at the Minories throughout the Festival. More about this later. 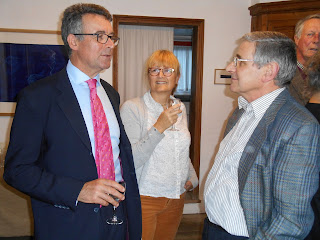 Roman River patron the Hon Bernard Jenkin mp explains to John Doubleday how he knows Jeremy Corbyn. Funny how everyone suddenly knows a man who a month ago no-one knew!
With thanks to Penny Hughes-Stanton
Posted by Unknown at 20:27