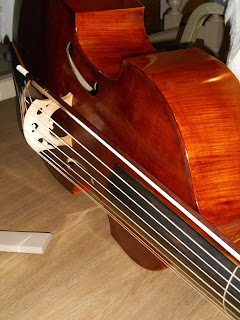 A period Viol de Gamba, played using a watercolour brush rather than a paint roller (a joke made by Matthew Truscott refering to the period bows they used). One of the interesting themes of this year's Roman River Festival is how the use of different versions of what are, ostensibly, the same instruments gives a very different feel to the music. The use of Gut strings on period instruments made the music of Purcell make so much sense. Click here to see how they are made. Orlando Jopling has written a facinating piece about the rise of period instruments in this year's festival programme - available at all concerts and well worth a read.
Anyone spotted other themes this year? I have enjoyed the singing of three very different Sopranos - The classically powerful Sally Matthews, the almost folk Amaia Azcona Cildoz, and the subtle, chamber treatment of Purcell by Julia Doyle. Same instrument, different outcomes. Anyway...enough of these musings, let's have another photo please Ian! (all photos except where credited snapped by me, live!) 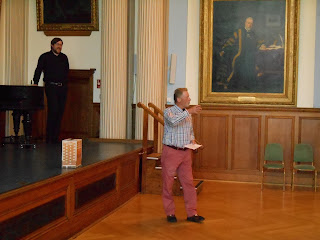 Here composer John Furse ('Moot Points') presents organist Tom Bell with a celebratory case of beer, and demonstrates (in verse) the correct method of use. Tom bravely said he'd wait until after the concert.
(I must thank volunteer Mike for this picture - as I entered the hall he said - 'there's one of the composers' and there happened to be a spare seat next to him... so there it is, a scoop for my blog!).
I did wonder what John was up to, fiddling nervously with what appeared to be a case of beer during the music!

And this picture shows another Roman River stalwart, Richard Spooner, having the tuning of the Harpsicord explained to him by Pawel Siwczak. Richard is one of many people that welcome the musicians into their own homes to provide them accommodation. 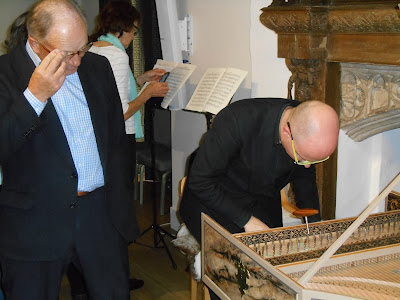 So, looking forward to Layer Marney tomorrow, my first listen to Elena Urioste. sorry, sold out I think (you could always try ringing).
Today's tune... London O'Connor - 'Guts' - took a while to find this, Enjoy!
﻿
Posted by Unknown at 19:27