So what did the Romans (River Festival) do for us? 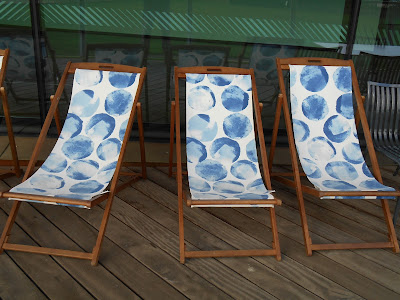 Firstsite, Friday, sun's out, time for a last deckchair of the summer. And Art. and Music. Drink to taste (mine's a pint at the Odd One Out - cheers John). It strikes me Firstsite deniers are like climate change deniers - they like to pretend it isn't there, despite overwhelming evidence to the contrary. And then they think that by ignoring it completely (rather than doing something positive) they can make it go away. 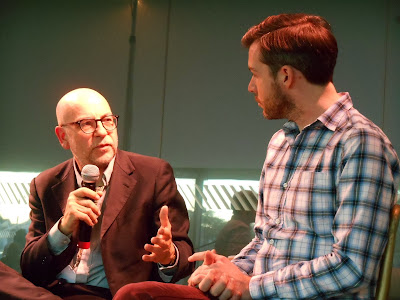 So, lots of positivity on show tonight for the world premiere of Gwilym Simcock's 'Quartet' written specially for the Roman River Festival. And an interesting talk beforehand with Colchester's finest, Anthony Roberts (left), gently prompting Gwilym to lay bare the creative process. Gwilyn was disarmingly frank, admitting to writer's block, and talking passionately about the death of his friend and great jazz Pianist John Taylor. He said that creating art is a privilege but not always easy. And the third movement is short because he suffered tendonitis. Music can be tough work!
And Robin Ashwell of the Sacconi Quartet could hardly get a word in edgeways  - but what was so exciting was his phrase ' hopefully we'll nail it tonight' - it's so easy to think of classical music as dots on a page by dead composers, but this was on the edge.  Brilliant.

I only caught a few snippets of Colchester Chamber Choir's rehearsal at St Martin's last night, but you can catch them with the beautiful Moot Hall Organ on Sunday, 5pm Tickets here

Today's song - Always look on the Bright Side of Life - of course! -(note the plug for buying the record)!. Monty Python, thank you Graham Chapman
Posted by Unknown at 23:03